A city devolution deal has been confirmed that will transport decision-making powers from Whitehall to the combined local authorities in the Sheffield city region. The deal provides extra powers for transport, skills and employment, business support and housing. It builds on the previous city and growth deals agreed for the region.

In terms of transport, Sheffield will take greater control over the delivery of transport schemes, providing the opportunity to introduce smart ticketing on local bus services. The deal also secures the Sheffield to Rotherham Tram Train service and provides more decision-making powers for roads and rail.

The highlights of the Sheffield devolution deal can be viewed here. 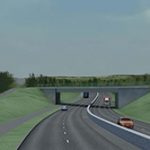